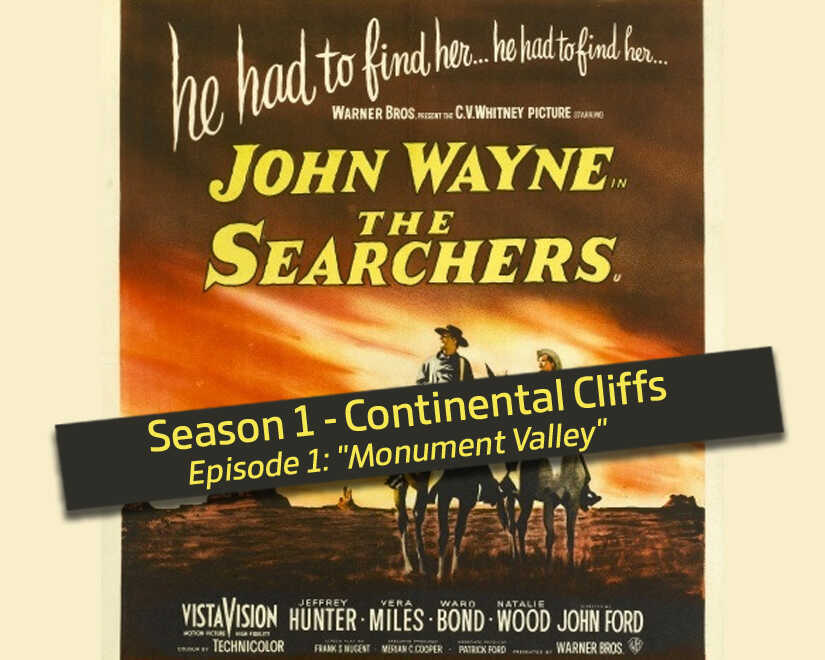 The Searchers by John Ford (1956), shot in Monument Valley in Arizona and Utah - USA

The story takes place in Texas in 1868. After fighting on the side of the Southerners, Ethan Edwards returns home. As soon as he returns, his brother’s family, Aaron Edwards, is decimated by a band of Comanches who devastate their ranch and kidnap the two little girls. The youngest is finally found dead but the oldest, Debbie, is integrated into the tribe. Faced with this tragedy, Ethan sets out on the trail of the kidnappers with two other companions. But his goal is very surprising: he is well decided not to save the captive but to kill her! Indeed, he can't stand the idea of her living among the Indians and sharing her intimacy with their chief.

The film is inspired by a true story. A little girl, kidnapped in 1836 in Texas, becomes the wife of a Comanche chief. Found years later, she was brought back to the white community by force. This event inspired the book by Alan Le May, from which John Ford drew inspiration.

If the film is, almost unanimously, recognized today as a masterpiece of the American cinema, it was not always so. In 1956, the mixture of genres bewildered commentators. Darkness and cruelty dominate, especially with a racist hero, a lost soldier of the Civil War, played by John Wayne.

John Ford breaks with the Manichean western of the good cowboy facing the wild and uncultured Indian. He says of the Comanches, "They are a very dignified people - even when they have been beaten. Naturally, they are not very popular in the United States. The public likes to see Indians killed. They don't see them as human beings, with a deep culture, different from ours. If you look at things in detail, though, you find that their religion is similar in many ways to ours."

The Searchers is considered an emblematic piece of the end of the "old Hollywood" and of a “western-alike” movie.  The film becomes, for many filmmakers, the starting point of the new contrasted and complex Hollywood.

The role of Debbie Edwards, the girl kidnapped by the Indians, was given to Natalie Wood, but also to Lana Wood, her sister in life, to play the same character as a child. Lana, whose real name is Svetlana Gurdin, decided to become Lana Wood during this shooting!

Monument Valley, Arizona, is a geological curiosity named "Tsé Bii' Ndzisgaii", the valley of rocks, by the Navajo Indians who occupied the territory. It took shape slowly and was, a few hundred million years ago, only a huge basin. Indeed, the erosion of the nearby Rocky Mountains led to massive deposits of sediments in the area whose fossilization gradually formed rock. But why is this area called Monument Valley? Because the site became in the 1940s a true symbol of the American West thanks to (or because of, some would say) Hollywood cinema and John Ford. Who hasn't admired in a western movie this breathtaking panorama made of these famous red sandstone buttes planted in the middle of the desert? Who hasn't dreamed of riding his horse in the middle of this mythical landscape?

Monument Valley's geological setting spans over 1,100 square miles or 1,770 square kilometers, between Utah and Arizona. Buttes about 300 meters high, known as "monuments," are emblematic of the valley. The rocks that line the valley are primarily sedimentary and range from Permian to Middle Jurassic time. Three formations characterize the monuments: Organ Rock, De Chelly, and Moenkopi (Blakey 1987). Millions of years of erosion have shaped the landscape. Its originality and beauty are due in particular to the volcanic "plugs" encrusted in the sedimentary rocks.  According to Gregory in 1917, this intrusion of dykes would have started between the Tertiary and the Upper Triassic.

Monument Valley is an exceptional place to study the geologic history of the Colorado Plateau. Rocks ranging from Pennsylvanian to Jurassic, about 192 million years of Earth history (Blakey 1987), shape the valley. Seas, great deserts, and river systems have alternated. The oldest rocks show the characteristics of a shallow marine environment, and since then seas have come and go in the geological history. More recently, volcanic activity is evident, resulting in the dykes.

Monument Valley Park reveals ten major formations: Halgaito, Cedar Mesa, Organ Rock, De Chelly, Moenkopi, Owl Rock, Chinle, Wingate, Kayenta and Navajo Formations. The base of the monuments themselves is composed of Permian Organ Rock shale. This shale layer representative of marine environments such as streams and tidal areas, measures approximately 700 feet. This period of deposition results in the creation of dark brown and red mudstones and siltstones that erode into low sloping angles. The next layer above the Organ Rock Shale is called the Permian De Chelly Sandstone. Approximately 400 feet thick, this quartz sandstone developed during a period of eolian deposition, typical of a desert environment. The old dunes are still visible through the cross-stratification of the mesas. Over a period of nearly 50 million years, the erosion of this environment shaped the buttes and spires visible today. Throughout the park, white caps on the De Chelly Formation, the Moenkopi Formation, appear inconspicuously. This red sandstone, stratigraphically younger than the rest of the rock formations, is often eroded.

Today, the Monument Valley park still remains one of the favorite playground of student and confirmed geologists.