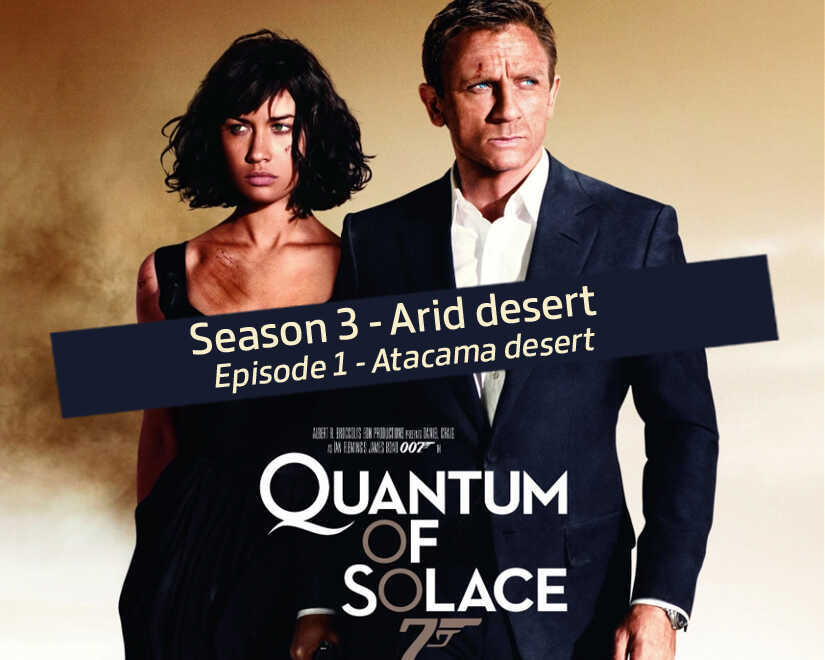 Quantum of Solace by Marc Forster – 2008

Do you like action, adventure, espionage and  british humor? Then go back and see Quantum of Solace, a James Bond movie full of twists and turns, very bad villains and beautiful, very sensual women. All the ingredients of the mythical series are gathered for a "top" session!

Quantum of Solace follows the Casino Royale episode in which James Bond loses his girlfriend to the Quantum criminal organization led by Dominic Green, a horrible assassin. Even if he fights not to give a personal character to this last mission, 007 tracks down the bloodthirsty Green. He meets during his mission a Bolivian secret agent, a gorgeous and determined woman, who tries to eliminate a dictator responsible for the murder of all her family. The couple realizes as the plot unfolds that the two cases are linked and that they lead to the same man: Dominic Green. From Austria to Italy through South America, Bond discovers that Green aims to take control of one of the world's most important natural resources - water - by manipulating the CIA and the British government. He buys up land, builds dams, causes droughts and then sells his water at terribly high prices.

The film is based on the short story ‘ Human Heat ‘ written by the British author Ian Fleming from his collection ‘Good Luck in Paris’. In 2007 the production suffered a writers' strike in Hollywood that greatly complicated the shooting. The actors kept a painful memory.

The word of the director back in 2008

This new James Bond film deals with a theme strongly linked to current events: ecology and the environmental crisis that is shaking the planet. ” I felt that ecology was in vogue in recent years " notes Marc Forster. The big companies have all gone green. Everyone is now presenting themselves as green. Recently, large companies have realized that they can make money by capitalizing on the green factor. It's quite cynical at heart. And that's kind of what we tried to say in the film.

The final scenes of the film, in which Dominic Green is left alone to his own end, are shot in the Atacama Desert. Located in the extreme north of Chile, it presents first a dried clay "pond" with drying cracks, then a "dislocated" crust of salt or gypsum mixed with clays. A semi-flooded lagoon rich in white salt deposits covers the ground facing the volcanoes, including Licancabur Peak at 5920 m altitude. An alluvial piedmont connects the volcanic chain to the flat bottom of the Salar or salt desert.

This lake with changing shores contains sediments made up of chlorides, sulfates, nitrates and borates which appeared under the effect of a strong evaporation. Its formation is the result of an arid climate - no rain coming from the Pacific because of the cold Humboldt current - and a tectonic context that favors the formation of endoreic depressions. The water comes from the nearby Andean chain, infiltrates, accumulates in the soil and is then loaded with salts. When they evaporate, the accumulated salts form a solid crust cemented by the desert wind. Since the Pliocene, volcanic eruptions and sedimentation, mainly evaporitic and clayey, have produced about 1000 m of deposits in the Atacama depression.

The endoreic basins, like the Atacama, correspond to a drainage network, completely isolated from the ocean. The water of the rivers never reaches the sea. Still very unstudied, these regions represent about 20% of the surface of the continents and are generally located in arid or semi-arid areas.

The Atacama Desert is a xeric shrub land where conditions are considered the most arid in the world. Precipitation is almost non-existent and evaporation exceeds it. The morning dews represent the only water resource for the living species and the strong thermal difference between the night and the day limits the development of the fauna and the flora. Nevertheless, the small rivers resulting from the melting of the snow flow towards the basin of the salar creating multiple oases privileged by the Atacamas Indians.

The Atacama Bench: a corridor between the Andes and the Atacama Fault

The Atacama Desert is squeezed between the Andes and the Atacama Fault.

The Andes mountain range which overhangs the desert is an example of orogeny by subduction. It occurs when the oceanic plate Nazca subducts under the continental plate South America and thus forms a volcanic arc that increases in volume during the geological eras. The added material constitutes reliefs and thus a mountainous chain along a cordillera. The dating of calc-alkaline volcanism allows us to determine the orogenic evolution of the region and reveals that the subduction regime began after the Permian. From the Triassic to the end of the Lower Cretaceous, the distensive regime dominates. A magmatic arc was established in the coastal zone of the period, characterized by an alignment of volcanoes along the Pacific coast. From the Upper Cretaceous onwards, phases of compression and distension follow one another in connection with global tectonism. The margin underwent periods of shortening, with folding at the surface, while subduction led to successive engulfment of continental margin packages. The magmatic arc eventually rises during the compressive periods to form the Cordillera Occidental.

These compressional periods correspond to those of south-eastern France with the first nappes of the Alps and the beginning of the Pyrenean-Provençal folding.

The still active evolution of the Andean chain causes a regular seismic activity.

The Atacama Fault Zone runs along the Pacific Ocean from north to south and extends over 1,100 km. It would have formed at the beginning of the Jurassic with the complex series of tectonic regimes. The separation of the Andean back arc from the Pacific Ocean in the Lower Jurassic, the intra-arc ductile deformation in the Upper Jurassic, creating mylonitic shear zones, the appearance of a belt related to the compressional regime in the middle of the Cretaceous, and then the extensional regime from the Oligocene to the Miocene, and finally the large fragile reactivations from the Miocene to the present day, result in the present-day Atacama fault zone.

The region is mainly composed of andesitic tuffs and lavas with large diorite batholiths. Cretaceous porphyry copper deposits enrich the eastern branches of the fault and are of human interest.

The Atacama Fault acts as a transform fault, a vertical fault on the scale of the leithosphere, allowing molten iron ore magma to migrate from its place of origin in the Earth's mantle to a shallow crust zone. The magma thus reaches the surface during volcanic eruptions and then the rock becomes iron oxide-apatite as it cools down.

The vitrified soils of Atacama would be traces of natural fires at the end of the Pleistocene. Apart from volcanoes, vitrified rocks on earth are the result of spontaneous fires triggered or fueled by fossil organic compounds - coal or gas - which produce what geologists call "paralavas" or paraderived lavas. Some glasses can also come from hypervelocity impacts of asteroids. The distinction between the two origins is simple in the presence of coal seams in the first case or impact craters in the second. In the absence of obvious clues, the researchers considered that the glasses resulted from an explosion at very low altitude of cometary or asteroidal material. In this case and by analogy with nuclear explosions, the kinetic energy of the asteroid or comet is transformed into intense radiation, enough to vitrify the surface of the ground in a very short time.

What is an endorheic basin and why are they so important ? | Géosciences Rennes (univ-rennes1.fr)

A review of hydrogeochemical mineral exploration in the Atacama Desert, Chile - ScienceDirect