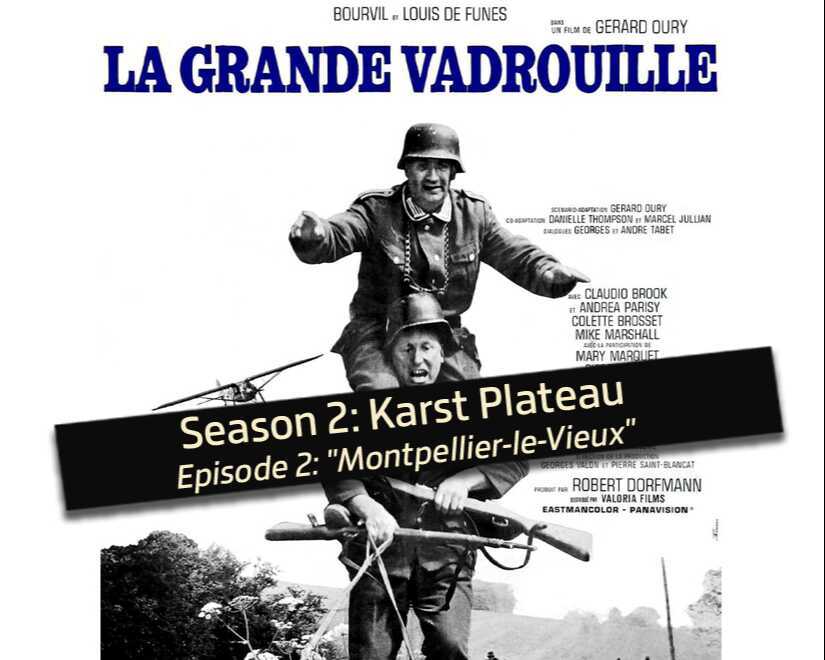 Literally "The Great Stroll", originally released in the United Kingdom as “Don't Look Now... We're Being Shot At!”

"What do you mean 'Oh merde alors ‘ but then you are French!" [Stanislas Lefort]

Do you appreciate French humor? Do you like to laugh out loud? Then discover or rediscover “The Great Stroll” (“La Grande Vadrouille”), one of the classics of French cinema. A mythical duo, Louis De Funès - Bourvil, a historic record in theaters on release, a timeless humor that crosses generations.

Directed by Gérard Oury in 1966, the Franco-British film remains a reference in France and belongs to a certain "film heritage". The facetious lines and funny adventures continue to make people laugh. The twists and turns follow one another at a frantic pace.

Yet the subject, difficult to approach from a burlesque angle at that time in Europe, deals with the German occupation during the Second World War and the precious help of the English to the French Resistance and the Free French Forces.

In 1942, a British plane is shot down by the Germans over Paris. The three British pilots parachuted out and landed in the capital. They meet by chance two Frenchmen who have nothing in common, a naive house painter and the pretentious and angry conductor of the Paris Opera House. The two men, involved against their will in a dangerous epic, must cross the demarcation line to reach the free zone. Chased by the Germans, the fugitives experience increasingly comical situations.

In Germany, La Grande Vadrouille was the very first comedy about the Second World War to be shown in theaters. However, the German version has some slight differences with the French and English versions. Some parts have been cut out, such as a humorous dialogue between Louis de Funès and Bourvil during their escape wearing German uniforms or the scene with Claudio Brook who reveals his English nationality to a German officer after spontaneously saying "I'm sorry" while spilling wine.

To attract visitors to the natural site of Montpellier-le-Vieux and encourage them to observe its geological specificities, the tourist companies promote a route entitled "In the footsteps of Bourvil and Louis de Funès".

Geological setting of the Chaos of Montpellier-le-Vieux

A classified French natural site, located in the regional natural park of the Grands Causses, the dolomitic limestones of the Causse Noir shape the ruinous rocky chaos of Montpellier-le-Vieux. The transhumant shepherds who frequented the area named it "Montpellier-le-Vieux", renamed "The City of Stones" in 2019, because the quasi-architectural arrangement of the rocks evoked that of a city like "Montpellier", a nearby town. They added the term "Le Vieux" (the old one) to emphasize the altered and dilapidated aspect of the stones. The landscape presents indeed , in karstic morphology, a characteristic aspect of ruins. The forms due to the erosion of certain heterogeneous facies, such as dolomites or calcareous sandstones, evoke ruined villages, with towers, walls, gates, obelisks... At the surface of the plateaus, they constitute a real labyrinth. The Mycenae gate , one of the most emblematic feature, is a masterpiece of nature.

The ruiniforme morphology of the karst of Montpellier-le-Vieux results from the erosion by dissolution of its dolomitic limestones deposited during Middle Jurassic age, about 170 million years ago, and subsequently exposed over a long time period.

At this time the North Atlantic Ocean opened between Europe and North America. India and Madagascar move away from Africa to give birth to the Indian Ocean. In the south, Gondwana forms a block with Africa and South America. In France, a large part of the territory is submerged except the Massif Central and the Armorican massif. The warm and shallow sea waters, under tropical climate, covered the sedimentary basin which today constitutes the rocky plateau of the Causse Noir. They sheltered a reef with algae and corals where numerous specimens of sponges, mollusks, sea urchins and crustaceans lived. 10 million years later, the remains and skeletons of these organisms covered the seabed and formed a 300 meters thick limestone layer.

Following the uplift of the Alpine and Pyrenean massifs, 100 million years ago, these deep rocks underwent high tectonic stresses. The limestone layers resisted, bended and eventually fractured.  As a result, parallel faulting occurred, similar to the crevasse and serac fields of today's glaciers.

80 million years later, the mass of the Grands Causses gradually rises and the sea retreats from the region. The limestone rock from the seabed contains sediments of marine organisms and undergoes scars, making it less dense and more permeable. In the case of the Grands Causses, the uplifting of the plates is carried out without folding, thus creating high plateaus.

Then, during the Cenozoic era, which began 66 million years ago, the continents continued to drift until they reached their current position. The climate cooled and mammals became the dominant species.