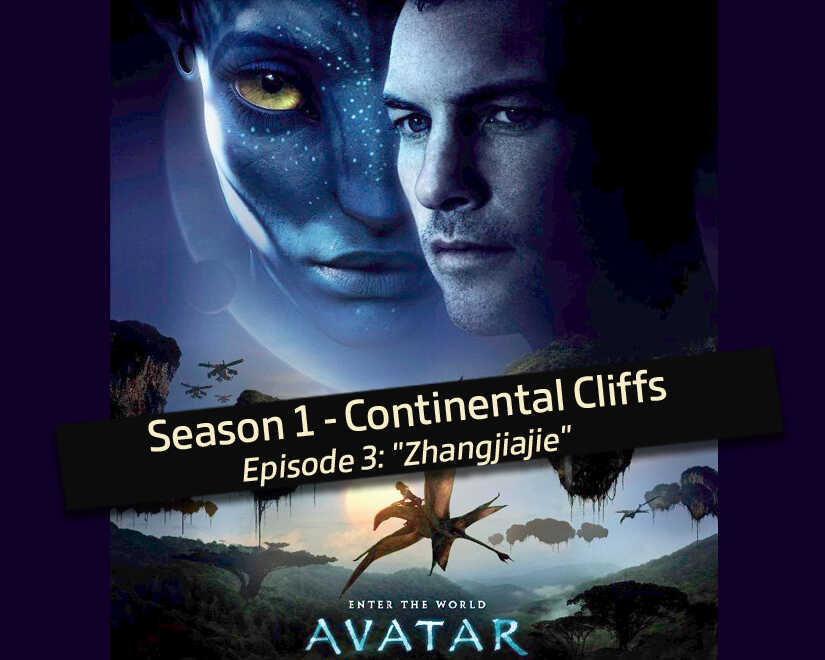 “She said all energy is only borrowed, and one day you have to give it back.” [Jake Sully]

Do you know of any films that blend styles as diverse as science fiction, action, adventure, ideology and psychology? Avatar is one of them! Released worldwide in 2009 , Avatar is a piece of work James Cameron has been dreaming about since 1994, when he wrote his first script. Its shooting was supposed to begin in 1997, just after Titanic. But the technological means, by then insufficient for such an ambitious production, forced the director to wait until 2006 to begin its realisation.

The story relates the mission of Jake Sully in 2154, a paraplegic former marine who is forced to live in a wheelchair, on Pandora the giant planet. Covered by a lush jungle and populated by natives called the Na'vis, its gaseous atmosphere is not suitable for humans. However, it contains a wealth of rare minerals that are coveted by large industrial groups. Their extraction can solve the energy problems on earth. Thus Jake, the veteran, is called in for a genetic experiment called Avatar and becomes the guinea pig of a program yet unheard of. His human mind is integrated into a remotely controlled Na'vi biological body capable of surviving on Pandora. The hybrid character is able to go and meet the indigenous populations among whom he must infiltrate to facilitate the exploitation of mineral deposits. But the course of his mission changes when he meets Neytiri, a beautiful Na'vi, and realises the planet inhabitants of the planet live in perfect symbiosis with the nature that surrounds them...

The feature film Avatar received a plethora of awards at the BAFTAs and the Golden Globes. But above all it won the Oscar for best special effects.

Avatar is one of the most expensive films in the history of cinema. But its immediate and dazzling public success also makes it the most profitable in the world. With more than 2.8 billion U.S. dollars profit, it represents the biggest commercial success of the 7th art. Avatar is also the most hacked film following its release, according to the website TorrentFreak.com which counts more than 16 million hacks. For the Avatar film, James Cameron asked Dr. Paul Frommer, a linguistics graduate, to invent a new language of 1,000 words that is unlike any other!

The images of the Avatar film to picture the planet Pandora come from the Zhangjiajie sandstone peak forest park in southern China. Classified as a Natural World Heritage Site by UNESCO, this geopark reveals 3100 pillars of various shapes and 800 clear rivers. The erosion of the sandstone layers shapes the landscape to give it a phantasmagorical aspect. On an area of 86 km2, columns up to 350 meters high, sandstone walls and arches mark out the place like sculptures carved over time. The story begins in the Silurian period, from 443 to 419 Ma, during which primitive plants, devoid of leaves, grew on the banks of rivers and lakes. Arthropods, originating from the seas, then began to populate the land. At that time China was divided into two parts: the Sino-Korean craton and the South China block, surrounded by oceans, on which the Zhangjiajie site rests today. The current appearance of the place originates notably from a process of transformation in the Paleozoic. Indeed, 380 million years ago, the southwestern part of the Hunan region underwent a strong subsidence period, leading up to the sea incursion and the establishment of a stable marine environment. At the same time, the shallower Wulingyuan area collected the shale and gravel transported to the coast. The long and complex solidification formed a thousand meters thick quartz sandstone package.

In the middle of the Silurian period, the region was under a shallow sea, as evidenced by the presence of lenses of bioclastic limestone composed of shells debris or other limestone residuals. Present in a thick layer of clay with sandstone intercalations, these sediments constitute the geological formations of Xiushan and Xiaoxi. Then as the sea withdraws, the sedimentation stops. But the process starts again during the Devonian period (from 419 to 359 Ma), where the first forests appeared. This time 520 meters of sand characterize the geological formation of Yuntaiguan. Composed of quartz grains, this sand was cemented and transformed into sandstone over time including silty and shaly layers. Finally, ferruginous sandstone containing one to three hematite layers forges the formation of Huangjiadeng with a thickness varying from 5.3 to 40.6 meters. These layers are more resistant to erosion and form "caps" considered as "fairy chimneys". During the Upper Devonian period, amphibians, the first vertebrates, appeared on planet earth.

The Carboniferous period (from 356 to 299 Ma), marked by the appearance of large swampy forests transformed into coal seams, did not leave any sedimentary trace on the Zhangjiajie site. By deduction the geopark had to be emerged at this time. The sea returns during the Permian time (from 299 to 252 Ma), depositing a thick layer of limestone. This sedimentation ends definitively at the beginning of the Triassic (252 to 201 Ma). Thereafter, only recent river alluvium deposits enrich the relief. The Jurassic and Cretaceous strata are non-existent.

How did the sediment layers erode while under the sea during the Triassic? First they were uplifted. The first movement caused the sea to retreat, not only from the region but from the two blocks that, when assembled, formed China.  This mechanism also caused the uplift of mountains. The second major uplift led to the formation of Asia during late Jurassic, from 160 to 140 Ma. A network of north-northwest- and east-northeast-trending faults gradually developed. Movements continued throughout most of the Cretaceous, from 130 to 68 Ma, reactivating pre-existing faults and adding a network of small joints, fractures of rocks whose two parts did not slide against each other.

The phenomenon of erosion did not begin until the middle of the Pleistocene, from about 1 Ma, and is probably the result of the series of glaciations taking place over this period. Changes in climate coupled with the development of the Suoxi River incised the land, which has continued to rise at a rate of 2 centimeters per century for the past 930,000 years. Geologists have identified ancient alluvial terraces. They have also assumed that the vegetation roots had played a role in the rocks fracturing. The presence of siltstone, less resistant than sandstone, may have caused notches, weakness zones. Rainwaters then eroded the slopes of the Mount Tianzi of Zhangjiajie, on all sides, hence shaping the sandstone pillars. The top of this mountain, more or less flat, still contains Permian limestones and a few caves. Further east, the Wangjia and Heicao valleys have been eroded in the same way. However, the life span of these landforms is likely to be short on the scale of geological time because erosion has not finished abrading them.