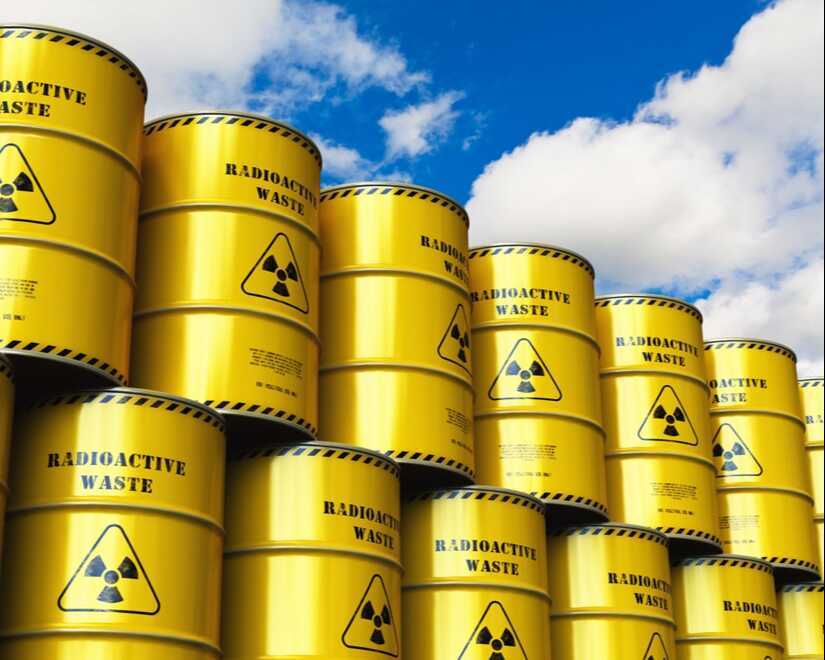 Today, nuclear power is considered by many to be the solution for the energy transition. Problem: nuclear power generates radioactive waste that must be stored in safe places to avoid irradiating humans and destabilizing the biosphere. Geological disposal of radioactive waste is currently the main option being explored for long-term storage of the most dangerous waste.

Nuclear energy emits 70 times less CO2 than coal, 40 times less than gas, 4 times less than solar, 2 times less than hydro and as much as wind. It also makes it possible to meet variations in electricity demand and to ensure energy independence for countries. Today, it appears to be an essential lever for moving away from fossil fuels.

Nuclear energy comes from the fission of the uranium atom into two smaller nuclei. This reaction is accompanied by a very significant release of energy that is used by nuclear power plants to produce electricity.

Uranium is a metal that is relatively widespread in the earth's subsurface. The ore is extracted from mines located in Australia, the United States, Canada, etc., then crushed, processed, refined, and finally enriched in uranium 235, the only fissile element. It is then compressed, cooked, and transformed into pellets weighing 7 g and measuring 1 cm in length. The energy released by the nuclear combustion of a pellet is equivalent to the energy released by the combustion of one ton of coal.

Stuffed into metal tubes several meters long, the pellets will be used to make up the fuel assemblies that will be placed in the nuclear reactor core.

The pellets remain in the reactor for 4 to 5 years to undergo nuclear fission reactions. They are gradually used up and transformed into radioactive waste.

Radioactive waste emits radiation that can be harmful to living beings and can contaminate the air and food. Most radioactive waste comes from nuclear power plants; the rest comes from the medical sector and scientific research, agriculture, industry, etc. Its radioactivity naturally decreases over time, but this decrease is more or less long.

The Short-Lived, Low and Intermediate Level Waste (LILW-SL) corresponds to small equipment contaminated during maintenance of nuclear power plants (gloves, clothing, tools, etc.), effluents from the operation of nuclear facilities, and products from research laboratories, hospitals, or the dismantling of nuclear facilities. In most cases, LILW-SL waste is stored on surface storage sites, in metal or concrete containers that are themselves cast in concrete. It takes about 300 years before it no longer poses a risk to humans and the environment.

High-level waste (HLW) is more problematic. In France, this waste comes from the recycling of nuclear power plants waste. This is the most radioactive and dangerous ultimate waste. It represents 3 to 5% of the spent fuel and can have a very long life, up to several hundred thousand years. It's doomed to be buried deep in the earth. Before being buried, it is processed and incorporated into a molten glass paste, then cast into a stainless-steel structure. Its high level of radioactivity causes a significant heat release, which increases the temperature of the packages to 350°C. It must therefore be stored for several decades in special facilities, such as cooling pools, to allow time for the temperature to drop to around 90°C.

There are currently a limited number of radioactive waste burial sites on the planet. The challenge is indeed particularly delicate! It relies on identifying geological sites with sufficient stability to act as a barrier for hundreds of thousands of years. The objective is to prevent the spread of radioactivity in the environment during the entire radioactive decay period.

However, a disposal stored at great depth (about 500 m) in stable geological formations is not enough to ensure safe storage of waste. In the 1960s and 1970s, for example, full-scale burial tests in the disused Asse salt mine in central Germany (Lower Saxony) resulted in radioactive pollution of the surrounding environment. The cause: movements and cracks that led to water infiltration and contamination of the groundwater.

Many scientists believe that different types of rock are likely to accommodate radioactive packages safely: clay subsoils, salt mines, crystalline formations (granite), volcanic tuff... But many environmental organizations and some scientists still consider that the techniques are not mature enough, that they are unsafe (appearance of faults, uncertainties over long periods ...) and too expensive.

The studies carried out to date have oriented the techniques towards a "multi-barrier" design: waste package, storage package, bentonite barrier, and finally, the geological formation that constitutes the highest ultimate protection barrier. The aim is to identify geological sites where the seismic risk is very low and the diffusion of water is very slow, but also where the physico-chemical conditions (temperature, pressure, rock composition, etc.) are compatible with the preservation of the packages and their non-degradation over the long term.

To date, only two countries in the world have obtained the green light to dispose high-level radioactive waste: Finland since November 2021, with the Onkalo project located on Olkiluoto, an island in the Baltic Sea, and Sweden, at Eurajoki, on the southwest coast of the country, since January 2022.

Several countries are also carrying out measurements and experiments by setting up underground laboratories: in France (at the Bure site in the Meuse region), in Japan (on the islands of Honshu and Hokkaido), in Belgium (at the Boom site in Mol, in the Antwerp region), in China (in the Gansu province, in the north-west of the country) and in the United States (in New Mexico and in Nevada). Other countries, such as Germany, Slovakia, Switzerland and India, are mapping the subsoil in order to identify sites capable of housing radioactive waste over the long term.

Like Finland, Sweden has chosen to deposit its waste at a depth of 500 m in homogeneous granitic rock with few fractures in which water could infiltrate. To mitigate the risk of fracturing the rock - which is real on these time scales - the waste is stored in copper sarcophaguses containing an internal layer of cast iron and enclosed in a bentonite gangue. In France, waste enclosed in packages (glass, steel, concrete) will be deposited in a layer of clay that has stable and insulating properties and where water circulation is extremely slow.